Researchers at Mexico’s IPN School of Medicine are carrying out tests with epicatechin, a molecule present in chocolate that causes cancer cells to self-destruct in cell cultures and animal models, according to the Scientific and Technological Advisory Forum.

Epicatechin, found naturally in cocoa, red wine, or green tea, can kill cancer cells selectively without affecting normal cells according to these specialists.

Additionally, they have found that combined with other drugs currently used in clinical therapies, such as paclitaxel (Taxol) and tamoxifen (Tamoxifen), it accelerates their effects and decreases the amount required.

The studies have been carried out in the laboratory with cell cultures, but now scientists are already carrying out research on animal models to check their innocuousness in living beings and in the medium term, they want to test on humans.

In Mexico, Chocolate isn’t just a sweet treat. It is a food steeped in history and spirituality that has lost its place in Mexican agriculture and production. This is a story about bringing it back.

For full version of the video,click here 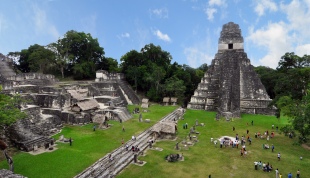 The Peten Department of Guatemala is the home to the most impressive and mightiest Mayan ancient ceremonial cities such as Tikal.

* Michael D. Coe and Sophie D. Coe: know for the book ” The true history of Chocolate.”

Posted by Geert Vercruysse on 17/12/2012 in Chocolate, History, Travel

NEW and DELICIOUS in our shop are the:

Chilis are often added to chocolate in Mexico for a spicy kick. We grind single-origin Dominican cacao using vintage Oaxacan stone mills to preserve its complex flavor and rustic texture, then blend in organic chilis. The result is a bright, bold chocolate that perfectly balances sweet with heat.

Posted by Geert Vercruysse on 30/10/2012 in Chocolate, Chocolate brands in our shop, Health and nutrition

The Art of Chocolate. From the Finest Cocoa to Exquisite Chocolate. part 9

Published by Max Felchlin AG, Schwyz, on the occasion of the 100th anniversary. (2008)

From Chocolate to an Agent of Delight

Solid chocolate that does not contain additives is perishable; it should not be left for too long before it is consumed as it will not improve over time. It should always be stored under dry conditions and at a constant temperature of between 12°C and 20°C; cold, heat and light are equally harmful. Under these conditions, it should keep for a relatively long amount of time: dark chocolate for up to two years, milk and white chocolate for up to one year. Dark chocolate has a longer shelf life than white chocolate, since the latter contains milk components wheraes dark chocolate contains oxidation-inhibiting substances, such as polyphenoles, for stability. Some additives reduce both suitability for storage and shelf life. These additives include milk and cream powder or nuts, which become rancid over time.

If stored in the fride, chocolate should be kept in a sealed, airtight plastic container to protect it from moisture and unwanted odours (such as cheese, pesto, cooked food), wich it would otherwise absorb. Before it is eaten, it should be brought to room temperature, as low tempearture prevent the aroma from unfolding fully. If  chocolate is subjected to a large change in temperature from a very cold to a very warm environment, moisture can release the sugar from the chocolate and, when the water has evaporated, the sugar remains on the surface in the form of crystals; this is known as “sugar bloom”.

A typical chocolate bar is a mixture of cocoa butter, cocoa solids, sugar, and an emulsifier such as lecithin. The cocoa butter and cocoa solids are made up of hydrophobic molecules (from the Greek for “water fearing”) while sugar is generally hydrophilic (also Greek, meaning “water loving”). Hydrophilic and hydrophobic molecules don’t mix well, so an emulsifier is used to help blend the different molecules and keep them from separating over time.

If chocolate is stored at too high temperature, if it is exposed to the sun or subjected to the sun’s rays hotter than 32 to 33°C, fat crystals froms and are deposited on the surface in the form of a white layer: this is known as “fat bloom” and is often mistaken for mould.

Similarly, fat bloom occurs when hydrophobic cocoa butter molecules separate from the rest of the chocolate and make their way to the chocolate’s surface. The specific causes of fat bloom are a bit more complicated and have been the focus of several scientific studies. Who knew so much research went into something as simple as a chocolate bar?

Another danger is oxidation, which occurs if the chocolate is exposed too often to light and air. The fats react with oxygen and become rancid; the aromas vaporise. The higher the cocoa content, the better the chocolate is protected against oxidation. Chocolate is best stored in an airtight container in a dark place.

This basic idea of mixing hydrophilic and hydrophobic molecules also explains the driving forces behind chocolate bloom. Sugar bloom occurs when chocolate comes in contact with water. Because sugar mixes with water more readily than the fats in chocolate, any moisture that comes in contact with chocolate dissolves the sugar at the chocolate’s surface. As the water evaporates, a grainy white mess of sugar crystals is left behind.

An unforgettable drink Although the Spanish were the first Europeans to taste chocolate, by that time, the Mayas and Aztecs has been enjoying the cocoa for a very long time. In liquid form, hot or cold, chocolate has probably been consumed for a good 3.000 years. However, solid chocolate, as we know it today, has been eaten for less than 150 years. The native Mexicans ground the beans into a paste, added spices and pressed it into cakes. To make it into a drink, they scraped the required amound from the hard cake, poured it into a vessel and added water. This chocolate is nothing like the chocolate we drink today. The native Mexican nobility refined the chocolate by adding ingredients such a vanilla, wild honey, agave juice and chilli powder. The conquistadors then adopted the basic recipe, including the vanilla, a New World plant but, because the flavour of the “xocolatl” of pre-colonial Mexico was too bitter, transformed it to their taste by adding lots of sugar, aniseed, cinnamon, almonds and hazelnuts. The resulting drink was praised for its energising and restorative effects.

A table lined with all the standard tools for preparing chocolate: a ceramic comal or griddle for roasting the beans, a metate or volcanic grinding table, a molcajete or mortar (upper right) for mixing the cocoa with other ingredients and a molinillo (lower left) used to produce the delicious foam that tops Mexican hot chocolate

For many years, chocolate was expensive and exclusive and was enjoyed only by the European nobility. The Spanish monopoly only crumbled when competition emerged from countries such as Portugal and England, and this brought prices tumbling down. Although the raw product became cheaper, chocolate was still not consumed by common man, such as farmers and craftsmen, but it remained the exclusive preserve of the upper middle classes. Chocolate houses opened serving the most expensive of tree new drinks, namely chocolate, coffee and tea. People enjoyed these beverages in vast quantities whilst discussing the topical issues os the day.

The chocolate consumed today consists mainly of cocoa powder and sugar or instant powder; this can be stired into a hot or, in case of instant products, also into a cold liquid. Although, today, real hor chocolate is very much rarity, chocolatiers and specialist shops and outlets that value authentic, honest and first-class products are increasingly re-introducing it. After all, it’s basically quite simple to make: take a few peices of chocolate (preferably different varieties of Grand Cru with varying cocoa contents up to 100 percent), dissolve them in hot, fullfat milk, stirring continuously, and there you have it: a delicious, slightly foamed hot chocolate drink.

An Edible History of Chocolate.

When chocolate arrives to you via the shelf of the local store, it is sadly disconnected from its origins in southern Mexico and Central America.  We aim to change that experience while supporting the farmers and communities that have given the world the great gift of chocolate.  Help us make a direct purchase of cacao from an organic cooperative in Chiapas, Mexico, and we’ll craft an edible history that will connect you to the roots of chocolate!  Read on and we’ll give you a break down of the who, why and how. 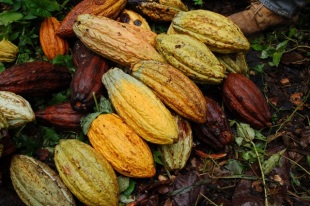 My first contact with Madre was with Natt Bletter about two months ago, I just found them true there website. I feld the same feeling about there chocolate and story as I feld with Adi chocolate Fiji, I wanted to taste the origin, birth of thise divine chocolate, so I contacted Madre.

After a few mails and a nice contact with Natt I received there samples, they are just looking great and the tasting will follow within a few days or so…

Now back on this project from Nat and Elliott:

Dear friends, family, & chocophiles alike,
Dave and I are trying to do something big here– take chocolate making back to where it belongs, to its roots in Central America– so we’ve launched a kickstarter fundraising campaign to help us help the cacao growing communities in Chiapas, Mexico who have been growing cacao and making chocolate for thousands of years by buying 1000 lbs of cacao and getting it processed into chocolate liquor in Chiapas. The cacao farmers there often have rare or heirloom varieties of cacao with unique taste characteristics and complex cultural practices surrounding their preparation of chocolate, with spices, flowers, and herbs that are rarely heard of, let alone tasted. We almost never ask for help or money, but since this is such a huge endeavor, where we are trying to thank the people who brought us chocolate, and help them keep alive their chocolate making recipes and associated ingredients, we are humbly asking for your support of this project:
http://www.kickstarter.com/projects/madrechocolate/an-edible-history-of-chocolate 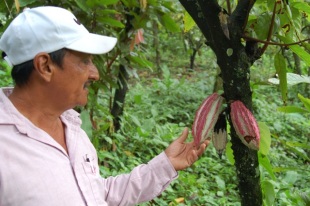 We’d be honored if you’d take a moment to watch our kickstarter video and learn how we’re bringing chocolate making back to its roots in the prized Aztec cacao growing region of Xoconusco, Chiapas, Mexico. As Dave and I travel in late June down from Oaxaca, where most of the chocolate is made in Mexico currently, to Chiapas where the cacao is grown, we’ll update you on tasty chocolate combinations and traditional recipes we find from Tejate, to Cacao de jaguar, Cacahuaxochitl, Achiote, and Atole. If you can pledge to help us support these cacao and spice farmers, you’ll get to sample all these amazing flavors rarely tasted outside of their origins in Southern Mexico while feeling good that you’re supporting the rich cultural heritage of chocolate in its birthplace, its tierra madrein Central America!
Thanks so much for your help & support,
Nat & Dave 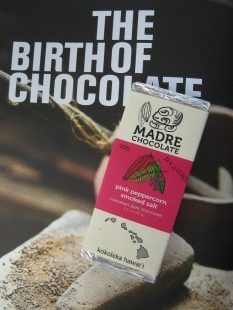 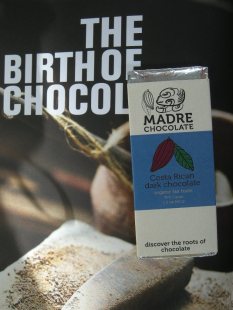 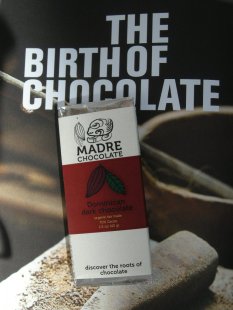 P.S. A huge thanks to everyone who helped us get this far already with chocolate making: our partners Abby & Dani for hours of understanding & support, Maiara for coming into the world in the middle of a chocolate whirlwhind, our families for getting us here, all our friends who cheered us on, Shirley & Stan at Chop Chop Media for making us 2 amazing videos, Kristen for keeping the shop & chocolate making running smoothly, Matt for dealing with chocolate dust devils & flames, all the farmers who have provided us with great cacao & fruits to turn into chocolate, everyone on The Chocolate Life and Chocolate Alchemy who have given us endless advice, and everyone single one of you who has bought and enjoyed our chocolate from Hawaii to the mainland, Belgium, Ireland, New Caledonia, Australia, and New Zealand!
http://madrechocolate.com
50.819313 3.269374