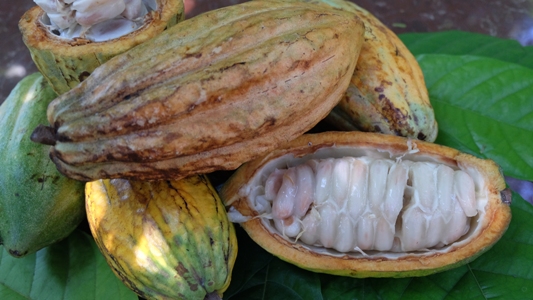 via Cacao: Food of the gods turned into wine 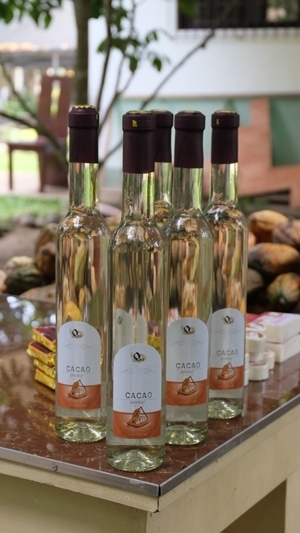 Cacao: Food of the gods turned into wine

Posted by Geert Vercruysse on 04/12/2018 in ChocolateFriends, Cocao Plantation, Drinks and Mixology, Health and nutrition, Learning about chocolate, Travel 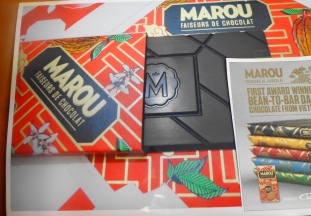 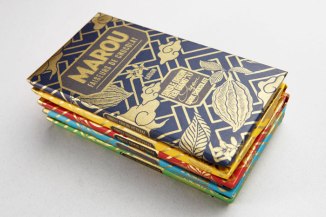 Posted by Geert Vercruysse on 26/06/2018 in Chocolate, Chocolate brands in our shop, ChocolateFriends, History, Learning about chocolate, Travel

Our chocolate grows on trees. 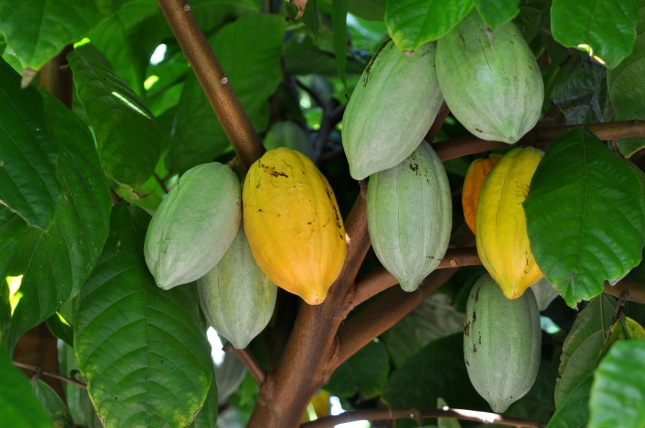 Good chocolate: this distinction may not be pertinent to anyone with serious cocoa cravings on their way to the supermarket for a quick fix, albeit of the mass-produced kind. For the casual consumer, chocolate is chocolate.

via The life and times of chocolate-making | SBS Food 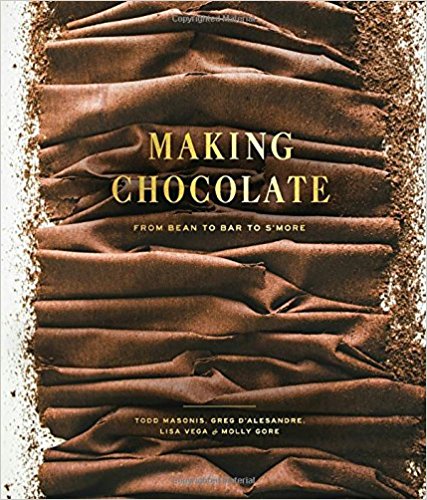 Even though Hershey absorbed Scharffen Berger in 2005, the seed of a new movement had been planted.
Among the very first US craft chocolate makers we could find companies like @patricchocolate, @amanochocolate and @askinosie. Capturing the potential of the cacao bean became a fascinating journey for many, and by 2016 there were at least 150 craft chocolate makers in the US…

via Sharon Terenzi op Instagram: “Reading about the history of American Craft Chocolate in @dandelionchocolate’s book “Making Chocolate” 🍫🤓📘 Summarizing from the book: It…”

“Chocolate is far more than a food. It is an invitation to life, disguised as a warm brown bar . It’s a trumpet call or a gentle rousing hand on your shoulder…Chocolat is an experience, an offer, a rite of passage, a good excuse to get together.” 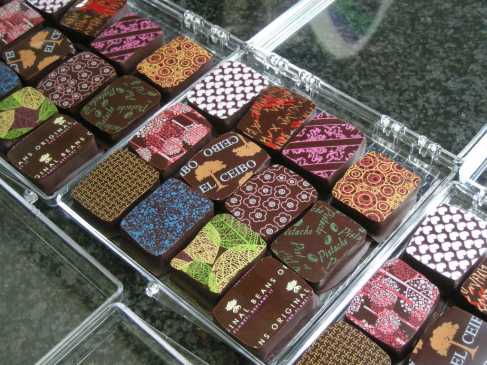 Posted by Geert Vercruysse on 12/02/2013 in Chocolate, Learning about chocolate

So now and then I need some marzipan and not always chocolate, to be creative 🙂 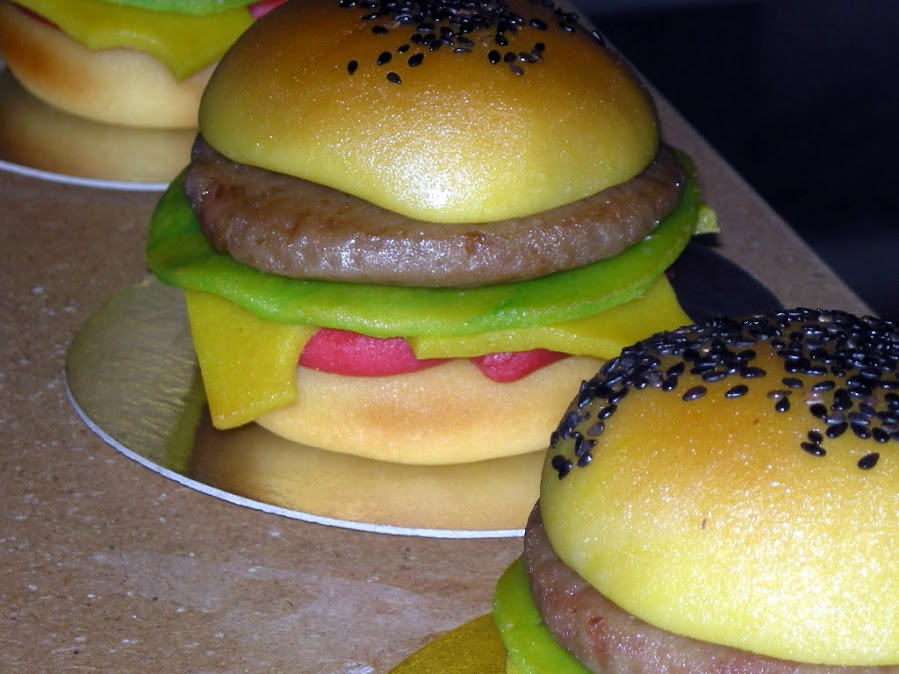 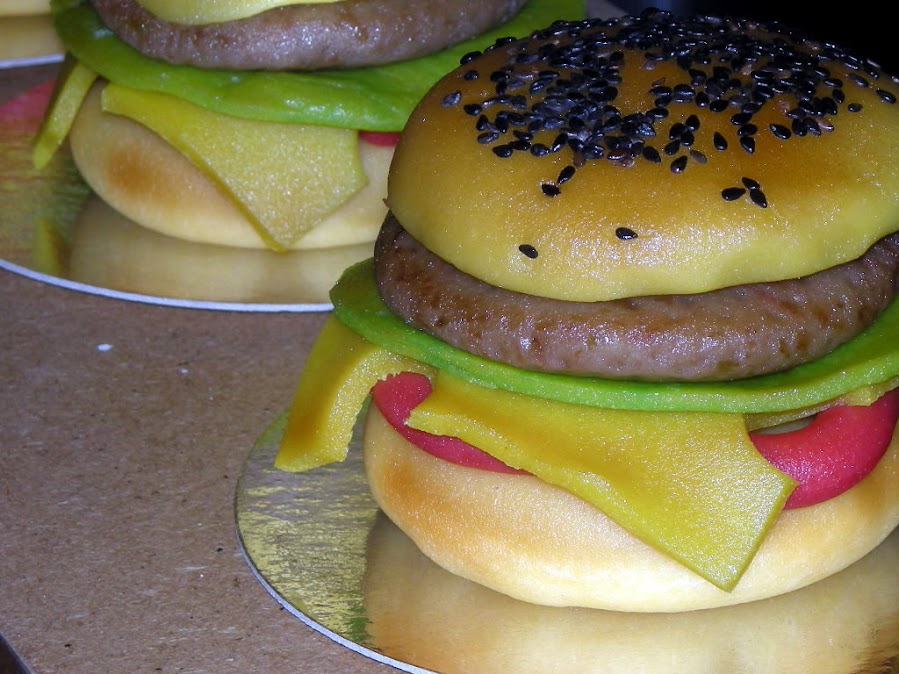 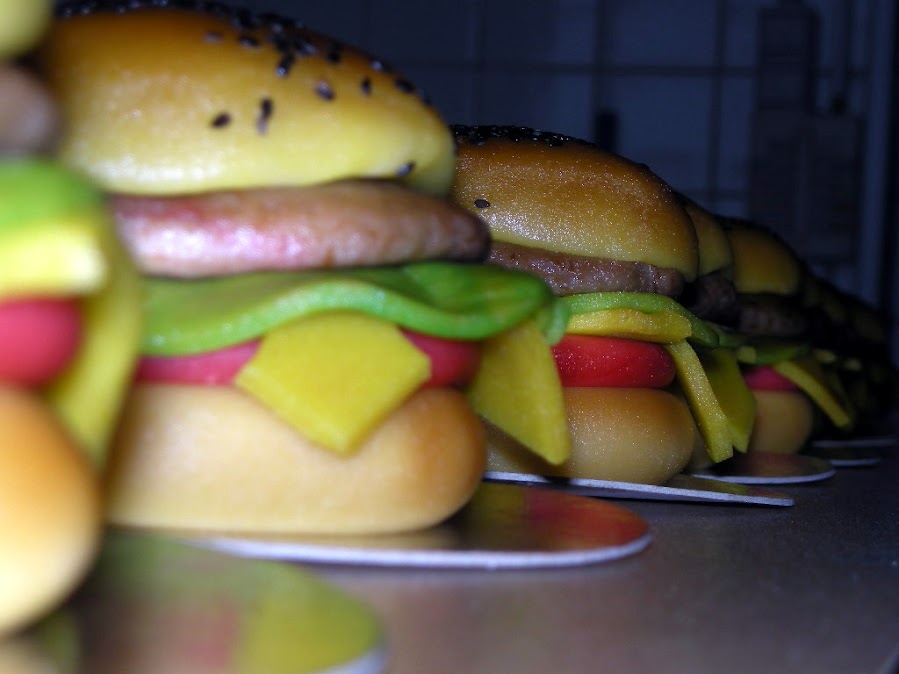 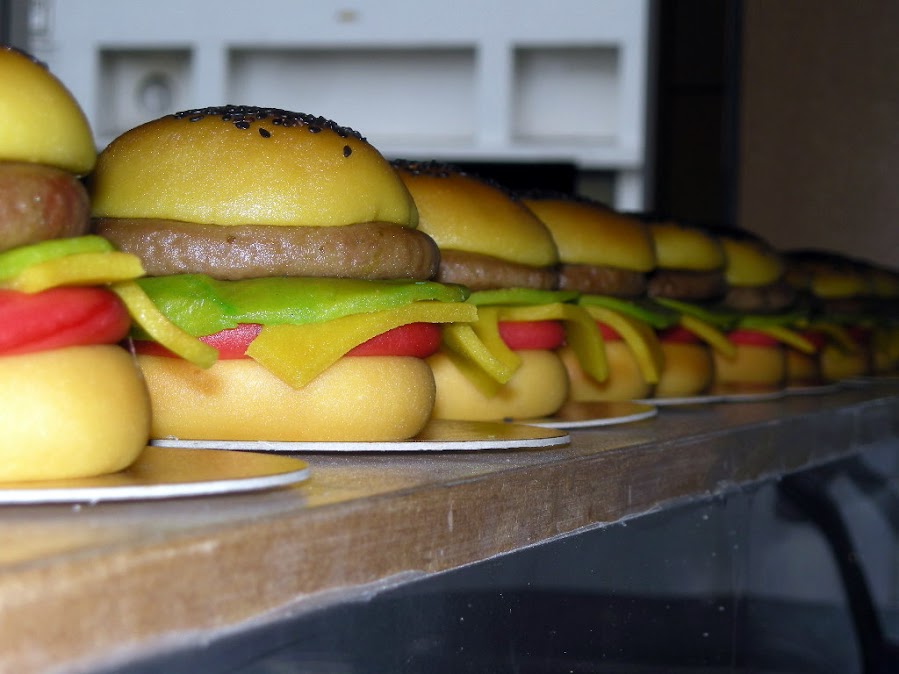 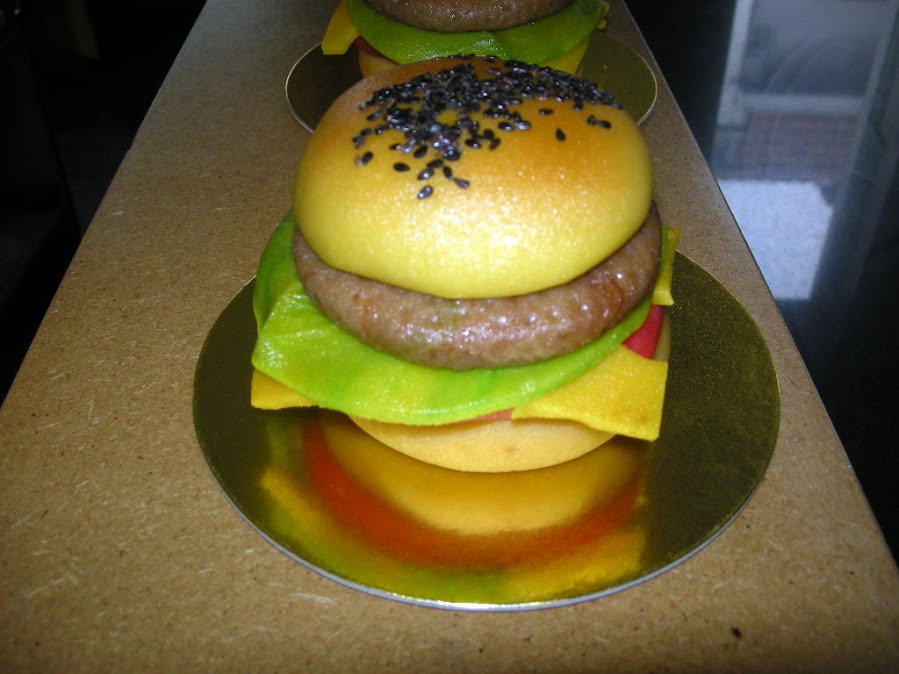 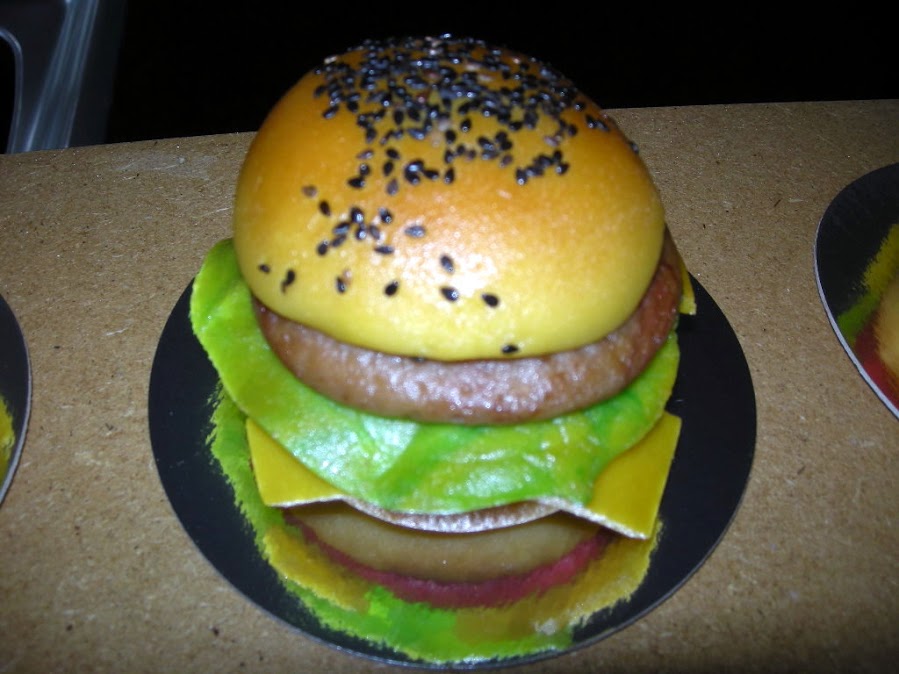 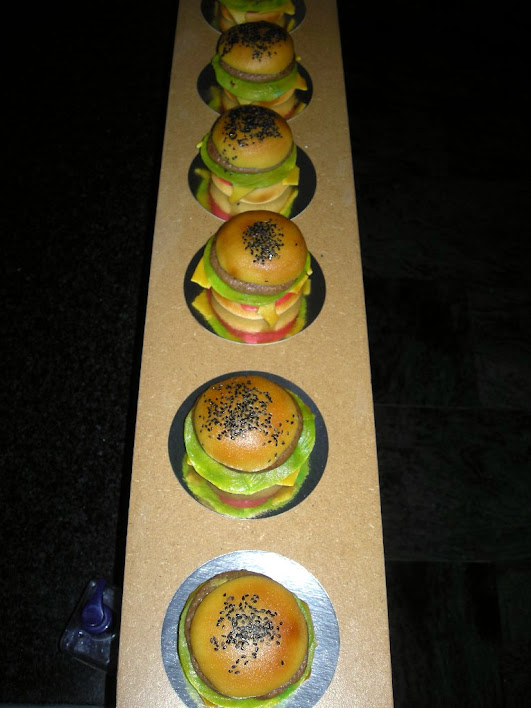 Posted by Geert Vercruysse on 15/11/2012 in Pastry & chocolate, Uncategorized

The Art of Chocolate. From the Finest Cocoa to Exquisite Chocolate. part 10

Published by Max Felchlin AG, Schwyz, on the occasion of the 100th anniversary. (2008)

A luxury foodstuff with chocolate’s vast arry of aroma’s really ought to be suitable ingredients for use in complex dishes. However, in reality, its powerful flavour makes it a difficult spice that can only be used selectively, and certainly not in coùbination with just anything. Chocolate is a good complement to olives, olive oil, liver and roasted products and its outstanding in combination with fruits ans some herbs.   For a long time, cocoa mass has been a vital ingredient in the Mexican dish, mole poblamo. The sauce that is served with chicken and turkey contains traditional crumbled cocoa mass, as well as onions, garlic, tomatoes, plantains, sesame, almonds, peanuts, raisins and prunes, coriander seeds, cinnamon, stale white bread, tortilla, chicken stock and a cocktail of four types of chilli and sugar.

The Spanish later adopted chocolate as an ingredient for sauces to complement game, for example, since the brown paste made the sauce go further. The Costa Brava is famous for its Catalan hare with almonds and chocolate (Ilebre amb xocolata). French cuisine also offers a dish of hare stewed in chocolate sauce (lièvre au chocolat) with a marinade of red wine, onions, garlic, carrots, leeks, thyme, bay leaves, nutmeg, pepper, lemon juice, ginger, cinnamon and cloves, which is thickened with dark chocolate, butter and chicken’s blood.

FOR HEALTH AND WELL-BEING In his book of herbs “Theatrum botanicum” published in 1696, Theodor Zwinger wrote that cocoa was both a food and a medication. Basel-born Zwinger (1658-1724) was regarded as one of the first real physicians and we can thus take seriously the healing properties he attributed to chocolate as used in the treatment of all kinds of illnesses and ailments.   For example, to treat coughs and to strengthen the heart, to protect against stomach complaints, respiratory problems and phlegm, as well as diarrhoea and dysentery. When combined with nutmeg and almonds, he attributed aphrodisiac properties to chocolate, writing that it roused the libido and was given by wives as a love potion to their husbands.

The art of the confectioner So, when did solid chocolate appear on the scene? The chocolate  bar? The chocolate that is not dissolved in a beverage or used in a sauce but that is enjoyed as a compact piece? The answer is at the beginning of the machine age when more and more work was rationalised and when processes that either difficult or impossible to carry out manually could be performed by machine.

Today, we have couvertures, the raw material of the chocolatier and the confectioner. We also have chocolate bars with just a few ingredients, such as sugar, vanilla and milk, as well as those with a greater range of ingredients, such as nuts (hazelnuts, walnuts, almonds, pistachios, macadamia), pieces of fruit, fruit aromas or fruit jellies (oranges, apricots, raspberries, grapes), or flavour combinations with coffee, nougat or caramel. Chocolate can take a lot of added ingredients. At the start of the new millennium, new combinations were launched on the market, mainly dark chocolate with lemon or grapefruit oil, fleur de sel, rosemary powder, cardamon and cinnamom, lavander and mint of curry spices from India, Thai curry, pink pepper or chilli. 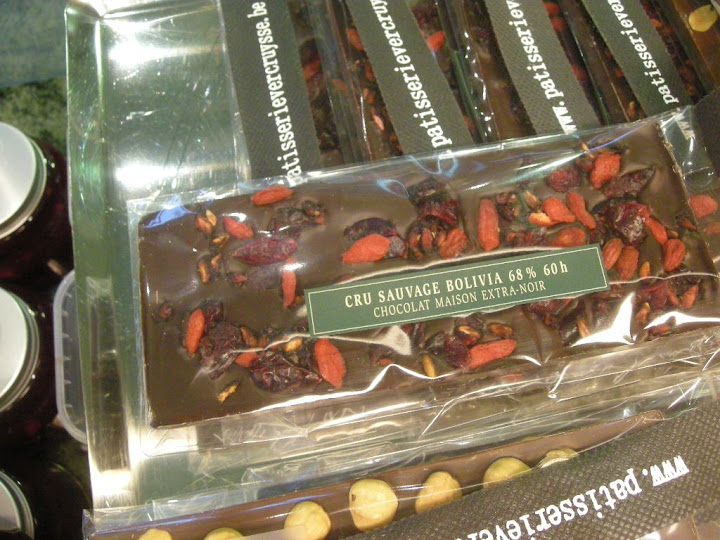 Today’s vast arry of confectionery and cakes would be inconceivable without chocolate. Originally, sweets did not contain any chocolate at all and were instead based primarly on oriental recipes perfected in the Viennese court. Pralines in the form of sugared covered in chocolate were first available in France in the 17th century. There are no known recipes for chocolate cakes dating back to before the 19th century.   In 1832, a 16 year-old apprentice called Franz Sacher invented the now famous Sacher-torte. This features chocolate as a glaze and the method has since become indispensable for lots of exquisite sweets. The development of ice-cream-on-a-stick saw chocolate used as a solid covering that held the ice-cream together, for a while at least.   The pâtissier continues to make black-forest gateau and, of course, mousse au chocolate. The specialist are the chocolatiers and confectioners working only with chocolate. “On n’est pas dans la farine” is their motto.

Franz Wiget from Adelboden restaurant in Steinen near Schwyz has devoted a lot time to the use of chocolate in the kitchen. This is partly at Felcjlin’s request since the company is keen to showcase the whole range of its aroma wheel of Grand Cru varieties in a top restaurant such as the Adelboden, which is situated near its manufacturing facilities. Its quickly became clear that working with chocolate and its characteristic range of flavours is a complex tast and that chocolate cannot simply be randomly combined with absolutely everything. The biggest obstacle is the sugar, explains Franz Wiget, which is why he works with finely-rolled Grand Cru cocoa mass that not contain sugar and, thanks to the skilled, restrained use of cocoa mass, has created some amazing and harmonious disches. The unsweetened, dark chocolate is particularly delicious in combination with olives, red meat and crustaceans.   The folowing is a selection from the chocolate menu featuring the Arriba, Maracaibo and Cru Sauvage varities created by Franz Wiget for Felchlin: Croustillant with green-olive tapenade and chocolate ( a tapenade is a spread over a thin triangular pastry base, a second piece of pastry is placed on top and the whole thing is baked until crispy; the tip of the triangle in then dipped in chocolate and croustillant is left to cool).   Cappuccino with potato puree and chocolate (potato stock in a glass with cubes of chocolate, covered in foamed milk and with cocoa powder scattred over the top).   Lobster soup with chocolate (made in the traditional way, thanks to the roast aromas that unfold during cooking, the lobster soup already tastes of chocolate; Franz Wiget simply adds two or three pieces of chocolate to the soup).   Foie gras with chocolate and orange marmalade ( the foie gras contains wafer-thin slices of Arriba cocoa mass that appear as black stripes when the foie gras is cut; the bitter-sweet marmalade goes with both the liver and the chocolate, the opulent aromas complement each other to perfection).

Beverage matching It only now remains to look at which can be enjoyed with chocolate.

In Marseille, it is the custom to break off a piece of pure, non-sweetened, hard cocoa mass and enjoy it with a little olive oil and an aperitif. Sweet wines in particular are a good complement to chocolate, for example, wines containing grape varieties such as Syrah, Rousanne or Grenache, wines such as Côte du Rhône, Banyuls, Chateauneuf-du-Pape, Bandol, as well as heavy Sicilian and other Southern Italian wines that often reveal “chocolate” on the palate during tastings.

The volatile aromas of distillates, such as Cognac, Armagnac or single-malt whisky, are simply superb in combination with the aroma and flavour of chocolate and can be enjoyed, for example, when unwinding at the end of a long day, to finish a delicious meal or simply on their own, since this is the union of two highly compatible partners, a marriage with fine prospects for a long, lasting finish. The reserve is also just as effective: chocolate containing spirits or liqueurs, for example, kirsch or absinth, cognac or whisky chocolate bars. Then, of course, there are alcohol-filled chocolates (canache).

Chocolate has the reputation for being an aphrodisiac and is a subject of heated discussion. However, if this is true, then the effect must be more in our minds than the result of any physical reaction since chocolate has not been scientifically proven to contain large quantities of any arousing substances.

There’s no doubt that, two to three hunderd years ago, the healing power of chocolate was much more pronounced than it is today. However, if we consider the number of chemicals the human body is subjected to today in the 21th century compared with the 17th century, how many substances modern man takes on a daily basis, such as vitamin pills and contraaceptive pill, then the little bit of magic present in chocolate is really not going to make that much of a difference, either to the invalid or to the lover.

However, we can console ourselves with the knowledge that chocolate is uplifting, that it is a quiet pleasure containing essence that help us to overcome life’s bitter disappointments, reinforcing what the infant realises the first time it suckles at its mother’s breast, namely sugar means love and a feeling of security.   This first formative experience of taste is the most important and remains with us throughout our lives, even if, in adulthood, we have to learn self-denial and prefer to eat something savoury rather than chocolate. “Self-denial” has been the enemy of chocolate for years, ever since the ideal beauty has been that of the ultra-slim model, dictating fashions and setting the tone of society in which we live.

Wherever self-denial is involved, quality of life inevitably suffers. However, a specific pleasure is a way out of dilemma we experience when caught between the opposing states of joy, frustation and desire for good healt: we don’t want just anything; we want the best. For example, chocolate that has been manufactured with the utmost care and devotion to detail, every step of the way — as at Felchlin. In short, we want a superior chocolate. Our own small piece of luxury.

next time final episode: The Innovators   In Pursuit of the New for 100 Years (the history of Felchlin)

Posted by Geert Vercruysse on 26/03/2012 in Chocolate, ChocolateFriends, Drinks and Mixology, Learning about chocolate