Chocolate’s Human Impact
Between five and six million people, largely
smallholders, grow cocoa around the world.
In Ivory Coast, cocoa farmers earn around 50
cents per day and in Ghana around 84 cents
per day. Farmers are shortchanged since
chocolate’s revenue and profits are strongly
skewed towards traders and manufacturers.

The revenue distribution has only gotten worse:
In the 1980s, farmers received an average of
16% of the value of a chocolate bar. today (2017/09), that
number is 6.6%. In comparison, 35% goes to
chocolate companies and 44% goes to retailers
like supermarkets.

Additionally, the chocolate industry is notorious
for labor rights abuses including slave labor and
child labor. According to the US Department of
Labor, “21 percent more children are illegally
laboring on cocoa farms in Ghana and The
Ivory Coast than five years ago.” An estimated
2.1 million West African children are still
engaged in dangerous, physically taxing cocoa
harvesting. Rather than eliminate the problem,
the industry has merely pledged to reduce child
labor in Ivory Coast and Ghana by 70% by 2020.

What kind of income are these growers earning? 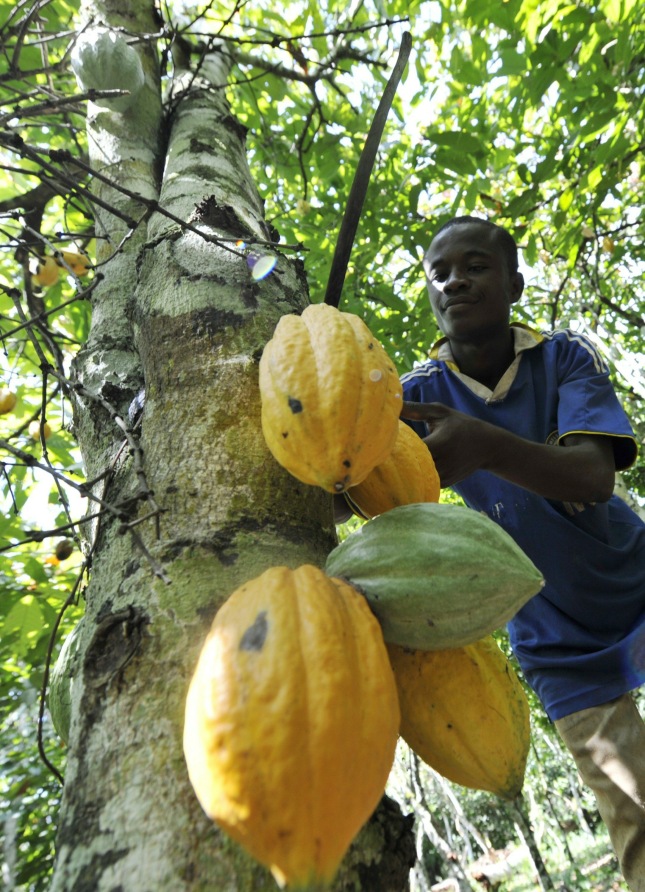 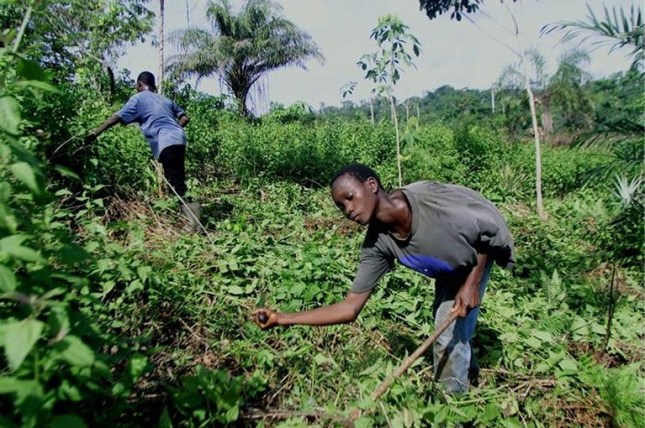 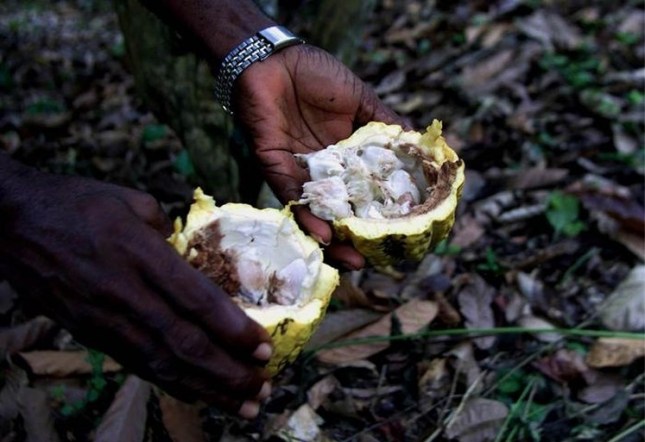 Future of chocolate: Attracting the next generation of cocoa farmers

Future of chocolate: Attracting the next generation of cocoa farmers.

Cocoa is Ghana, Ghana is Cocoa… 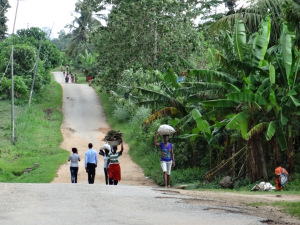 Cocoa is Ghana, Ghana is Cocoa….

via Cocoa is Ghana, Ghana is Cocoa….

Posted by Geert Vercruysse on 16/06/2014 in Bloggers, Chocolate, ChocolateFriends, Reviews

For the first time I’m savouring “fine, organic and fair”chocolate from Ghana.

Thanks to a special friend: Sepp Schoenbachler.

Felchlin has processed cacao from Ghana, West Africa for many years. Until recently, it was impossible to acquire the cacao beans directly from the producers. The project Yayra Glover has enabled us to eliminate this problem and allow us to guarantee the origin of our cacao beans from Ghana, therby specifying traceability to the origin.

The history of cocoa in Ghana
The fist missionaries from the Basle Mission were sent to the then Gold Coast, today’s
Ghana, in the year 1828. According to the story, these missionaries, who were working together
with Tetteh Quarshie, brought cocoa into the country. Around 1870, the Ghanaian
Tetteh Quarshie worked for a few years on an island in the Gulf of Guinea. The island, on
which cocoa was already grown, was a Spanish colony. Despite the strict prohibition, Tetteh
Quarshie succeeded in smuggling a few cocoa beans into his homeland on his return to
Ghana and successfully raised cocoa plants from them. The Spanish-Portuguese cocoa monopoly
was thereby broken, and the valuable beans found their way to Africa.

The importance of cocoa in Ghana today
Ghana is the second largest export country for cocoa in the world. For the last 60 years, all
the cocoa grown in Ghana had to be sold to the “Ghana Cocoa Board”. This government organisation
controlled and marketed all the cocoa, either for export or for domestic use (local
processors). The raw material cocoa is one of the main sources of foreign exchange for Ghana
and is therefore of enormous importance.

The Yayra Glover Company and its vision
According to the vision of the Ghanaian Yayra Glover, cocoa production in Ghana should be
realigned in the future. His company wants to cultivate and market the cocoa from the entire
Suhum-Kraboa-Coaltar district in line with both, organic and Fairtrade guidelines. And all of
this with the active support of Swiss agronomists.

In doing this, Yayra Glover trains and informs the farmers about local, regional, national and
even international topics. Important issues such as child labour, organic food, natural plant
protection and sustainable agriculture are thereby central. However, in addition, the people
should also be given the means and the opportunities to themselves bring about changes in
their own lives.

He also sees his task as being the general improvement of the well-being of the farmers and
their families by means of smaller social research activities. Students from universities have
the opportunity to work for agricultural communities, to collect data and to create practical
recommendations that can be implemented at the local level in order to raise the prosperity
of the population.

Through tireless work, Yayra Glover succeeded in convincing the “Ghana Cocoa Board”
about his project. He is thereby the first person who is able to sell his cocoa directly to his
customers, of course with the support and approval of the Cocoa Board.

Cocoa from the Suhum-Kraboa-Coaltar district, Ghana
The Suhum-Kraboa-Coaltar district, from which Felchlin now obtains its Ghanaian cocoa,
lies on the southern edge of a large forest area, 60 km north-west of the capital city Accra.
Coastal savannah extends towards the south, while the Aburi chain of hills forms a natural
border to the east, with the protected Attewa forest to the north-west. The entire district is
relatively hilly, with flat valleys intersected by rivers and streams.

Yayra Glover, a Ghanaian with strong ties to Switzerland, is the founder of the project “Suhum Cacao”. He studied and worked in Switzerland for many years and his family still lives here. His vision is to cultivate cacao in the Suhum-Kraboa-Coaltar district under the organic and Fairtrade certification labels. In this way, he hopes to support his countrymen by producing a premium quality cacao that would secure their future financial existence.

The cacao cultivation incorporates an area of approximately 6’500 ha, which involves around 2’600 small cacao farmers. After long negotiations, Yayra Glover convinced the Ghana Cacao Board of his project. His efforts have born fruit and he is the first, except for the Ghana government, who is authorised by the Cacao Board to sell cacao from the Suhum district to Felchlin Switzerland.

The cacao beans from Ghana are primarly blended with other cacao beans and used in Felchlin Switzerland Surfine and Classic couvertures.

Cru Suhum 40% flavour profile: the balanced cacao flavour leads to a harmonius play of fresh milk with a nuance of caramel. The finish begins with a pleasant malt note to be completed with a mild marzipan flavour.

Cru Suhum 60% flavour profile: the aroma experience of Cru Suhum couverture is distinguished by a harmonius cacao flavour enrobing the strong coffee note. The slow, traditional processing method allows the fruity, sweet pineapple flavour to develop. The finish is complimented through a nuance of dried pear encased in a sustained black tea flavour.

The risk that cocoa suppliers will not be able to meet the required demand is a serious threat to the cocoa sector. The trees that produce cocoa beans are generally old, are rooted in over-farmed soil, and are tended by poor farmers with little if any formal educaton. The majority of farmers are smallholders, which means that they grow cocoa as a cash crop on a small plot of land, along with food crops and occasionally also with other cash crops. From the income generated by these cash crops they pay their hospital bills, debts, their children’s school expenses. Farmers rarely have any remaining financial means to utilise for on-farm investments. Crop losses are a huge problem, as a large portion of the harvest is usually lost to pest and diseases. Money to invest in new plant material, fertilizer or pesticides is lacking; the know-how to apply it is scarce. Farmers often work by themselves and receive little support in terms of training, advice, or access to credit. In this context, exasperated by poor infrastructure and their marginal position farmers sometimes keep their children from school and allow them to help or work on the farm.

Because of these appalling conditions, the continuity of cocoa production is under threat. First, there is an exodus from the countryside as youngsters see no future there and seek other possibilities by migrating to the city. Additionally, crops like rubber, cassava, and oil palms have become more profitable for farmers. Cocoa production in West Africa shows a decreasing trend of 2% per year, while, at the same time, demand for cocoa products, including high quality chocolate, is expected to increase in the near future. The cocoa industry is concerned about these developments and faces a majpr challenge: how to assure that supply continues to meet demand.

In order to assure that farmers remain in the cocoa business and increase the quantity and quality of their production, industry partners are investing heavily in farmers. Multinational companies have their own initiatives, they are also increasingly collaborating to jointly tackle the problem of supply failure. Not only cocoa companies, but also goverments, financial institutions, NGOs, labour unions and certifiers have been joining forces to provide support to farmers. A example of such efforts is the international Cocoa Livelihoods Program. Thhis program focuses on enhancing farmer knowledge, improving farmer marketing skills on agriculturally diversified farms. The Dutch have positioned themselves as leaders in the proces of mainstreaming sustainable cocoa. It is estimated that Dutch companies will invest around $325 million in sustainable cocoa during the course of the next several years (accessed15 July 2010). In the Netherlands a number of industry players have united forces, together with goverment and members of civel society, realise the goal of sustainable cocoa and, addressing the risk of supplier failure, to improve yields and profitability for farmers. One of the results is the UTZ CERTIFIED Cocoa Program, established by several multinational companies.

With this initiative they want to at least double the current yields of approximately 400 kg / ha by training farmers in modern farming techniques, using new plant material and increased use of fertilizer. They also want to increase dialogue with authorities to improve enabling factors. The program focuses on the largest producer countries: Ivory Coast, Ghana, Indonesia, Nigeria, Cameroon, and Ecuador. By focusing on capacity building in the source locations and providing farmer training, the program aims to improve the farmers’ productivity and the quality of their produce; which ultimately should be rewarded by the market, under the maxim: ‘Better price for better products’.

Posted by Geert Vercruysse on 31/05/2013 in ChocolateFriends, Cocao Plantation, Learning about chocolate, Sustainable